Speakers at a focus group meeting, titled ‘Promotion of Interfaith Harmony and Coexistence in the light of Paigham-e-Pakistan’, unanimously decided that as per Mithaq-e-Madinah charter all Muslim and non-Muslim citizens of Pakistan shall be treated with absolute equality and a subject of inter-faith harmony, tolerance and peaceful co-existence should be introduced as a compulsory subject in schools. 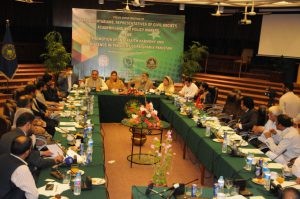 Speaking at the seminar, the parliamentarians, representatives of civil society, academicians and policy makers unanimously stressed the need for reviewing the country’s educational policy and ensuring training of teachers and scholars to respect other religions and their sacred places, on the basis that Islam did not allow extremist practices.

Most speakers said that common faith centers should be established in different areas of the country to enable people to practice their religion with freedom.

Addressing the participants, MNA Rubina Khursheed Alam read out a joint declaration saying that it was a continuation of the Paigham-e-Pakistan resolution, adopted on May 26 this year during a national seminar on ‘Reconstruction of Pakistani Society in the Light of Mithaq-e-Madinah’, under the chairmanship of the president of Pakistan.