Speakers at a national conference stressed the need for collective efforts to rid the country of the menaces of violence and sectarianism and build a peaceful society in the light of Islamic teachings.

The two day national conference titled “An inclusive and peaceful society in Pakistan: challenges and opportu

eachings for inclusive society. He added that non-violent attitude is Islamic legacy as it had been an attribute of Prophets. He stressed the need for promotion of historiography to introduce youth with cohesive and peaceful Islamic teachings.

He opined that national cohesion is actually an exquisite example of Islamic vision of peace. Talking about the inclusiveness in societies and its success, the CII chief said societies practicing such attributes are the respected ones. Dr. Qibla Ayaz said that it is  an urgent need of hour to convert challenges into opportunities for progress.He called upon faculty and schools to nurture youth in an environment that may lead to discourage sectarianism in the society.

Prof. Dr. Masoom Yasinzai, IIUI Rector said that university is focused to produce balanced human resource enlightened with the Islamic teachings.  He hoped Paigham e Pakistan forum’s 5 year plan of action for peace, cohesion and inclusiveness will be a source of peaceful inclusive society. He opined that peace and progress are hand to mingle.

Talking about the economic stability, he said we must prioritize peace as it is a prerequisite for a strong economy. The IIUI Rector stressed that the peace spoilers must be discouraged and they must be dealt with iron hands. He urged faculty and institutions to disseminate peace across society and utilize all modes in this regard. 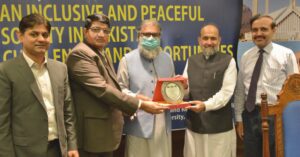 Speaking on the occasion, Prof. Dr. N. B. Jumani, Acting President IIUI, called upon social scientists to promote research that should have direct impact on society. He also stressed upon universities to play role in building future leadership in the light of Islamic teachings. The IIUI Acting President hailed IRI and its efforts for Paigham e Pakistan saying that it has been serving society and Muslim world in best manners.

Dr. Zia ul haq, Director General IRI, spoke about the objectives and importance of the conference. He also briefly elaborated future goals of IRI and Paigham e Pakistan forum for inclusive society. He also discussed Social impact of IIUI’s efforts on Muslim societies. He announced that soon a well-planned 5 years plan of action for inclusive society from the forum of Paigham e Pakistan will be commenced. The opening ceremony was also joined by Deans, scholars, researchers and faculty members